skip to main | skip to sidebar

Nice timing as well, as the stock promptly dropped to close at $21.21.

Away from that, I've been distracted a little from actively trading lately. I've got 5 stocks in my personal portfolio that have been a DISASTER (all longs)...4 of them I have as I think long (LONG) term the technology they offer will be world-changing, and the stocks could have multiple gains. And one of them I just think is stupid cheap. But literally 3 of them are down 50%, one is down 40% and one is down 70% from my average price. Maybe I should stick to day trading. I may elaborate on some of these in a future post.

And aside from that, this Oil short I have is f*cking frustrating. I can't believe this stuff is trading at $110 today (my short is at around $87). The data that's coming out seems to show that oil use is DOWN in the US, which accounts for around 25% of all oil use I understand, and also the trade deficit would be coming down if it wasn't for the price of oil. Since I think that the markets will eventually do what it takes to save the US from complete meltdown, I think oil will fall and cause the deficit to drop somewhat. But it's certainly a tough ride at the moment.
Posted by 2and20 on Wednesday, March 12, 2008 6 comments:

Well, that was an interesting day...the biggest up day in the stock market in 5 years...a sure sign of a bear market. I knew yesterday was a day of fear, hence me buying C, FRE and LEH. However I was also slightly fearful, so didn't put as much in as I usually do on a trade. So now I'm taking it on the chin on my shorts (which are thankfully much less than they were a week ago at least), whilst making some back on the the longs I put on. 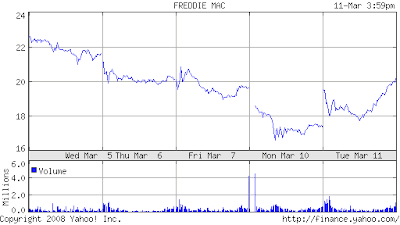 Citi also looking good ending up 9% today. I think this is the type of stock you buy when the world feels like it's falling apart. If it can get through this credit crunch, it has significant earnings power, a large dividend yield and could be a great long-term investment.

I'd also like to reiterate here how much I like 2 of my shorts...Hormel Foods (HRL) and General Mills (GIS)...these guys sell packaged foods. Think about it. They have to PAY for commodities (wheat, corn, sugar, meat etc) and turn them into cans/packets of stuff to SELL to consumers...I am thinking that there is no way they can pass on the size of price rises they are having to pay for their input costs, so margins must fall. Looks like the stock market doesn't buy my theory though, as these two have crept up marginally since I put them on a month or two ago. We'll see how this plays out, I'm pretty confident.
Posted by 2and20 on Tuesday, March 11, 2008 No comments:

Financial stocks are taking a BEATING today, following Bear Stearns liquidity rumours, taking the stock down the most since the 1987 crash, and battering other financial stocks. Lehman also out saying they are laying off 5% of their staff globally.

Whilst the fundamentals are still clearly disgusting for the financial sector, when fear is high you can sometimes get great entry levels, so looking for a good near-term bounce in all of these, purely on technicals. Lehman seems a decent one though, I still think them and Goldman are pretty well run banks, so will probably whether all but a complete financial meltdown (something I am definitely not ruling out).
Posted by 2and20 on Monday, March 10, 2008 1 comment:

OK so as I just mentioned in the previous post, I got a little lazy with the blog over the last couple of weeks. Here's what I've been doing (and if you've any doubt I'm making this up, I'll just point out now that if I'd actually waited til today for most of these trades I'd have made a lot more money, so hopefully you'll believe me on this! Anyway this blog is here for me to keep track of my EXACT P+L, so all numbers completely reflect what I make, including all expenses)...most of it was covering existing positions:


March 4th, bought Downey Financial (DSL) at $24.04, having originally sold it on Feb 1st at $33.95, for a profit of $1,982. Was literally just a few hours early to cover this one, as the stock proceeded to plummet even further, and is currently at $19.78. Oh well, can't argue with a 29% return in one month. Still think this company goes bust, but thought I could trade it around a little.

Same day, I covered Vornado Realty Trust (VNO) at $82.34, having sold on Feb 1st at $90.70, giving a profit of $836 and a return of 9.2%. Like some other trades I closed out that I'm about to mention, I felt the size I had on was too small, so taking my profits and if it gets close to my original entry I'll get in in bigger size.

And FINALLY, covered General Growth Properties (GGP), making 11.9% for a profit of $902. Again, was just too small in this one unfortunately.

Have been away travelling plus also a little lazy with the blog. Was also having some problems with the spreadsheet, but I've fixed it now. This Google Docs thing is rubbish, they are kidding if they think they'll ever get people to move from Excel to an online application...

Most of the money was made being short equities and indices, and most of the equities I was successfully short was in sectors pretty close to this credit crisis (financials, reits, homebuilders etc). Also took some money out from selling options on GBP, and a little from being long 10y Treasury futures briefly, a trade that I'd intended to get back in on but I hated the price action as yields went from 3.55% to 3.90% pretty quickly. On the losing front, I got a good kick in the nuts from being short Oil, dropping around $15,000. Very frustrating, like I said I'd been on the road, and literally didn't even see it between ~88 to ~98. I'm mildly nervous on this one, although I think eventually fundamentals will kick in and take it all the way back down. We're already seeing fuel use fall in the US (can't remember where I read it so no link). Demand drop CAN take even oil prices down, and I don't think many people appreciate that.

My next post will follow shortly, detailing trades done over the last couple of weeks.
Posted by 2and20 on Monday, March 10, 2008 No comments:


Any trade ideas in ANY market, or thoughts on my trades, welcome...post 'em in the comments.